Once, a garden of gigantic flowers, not this area is flooded and holds the endangered Aqualoons. Their homes were destroyed by Mary of the Monsters.

Spitos: (no picture available) are clam-like creatures that spit oil when scared. They live in the Aqualakes and connecting Lakes & Rivers.

Blowgels: are similar to jellyfish only, they puff up and reveal spikes when upset or frightened. They live in the Aqualakes and in the connecting Lakes & Rivers.

Steels: have human torsos with eel-like tails with flowing fins for arms and along the tail. They all have starfish on their heads (for a specific purpose) and hate socializing in general. Steels reside in the Aqualakes and connecting Lakes & Rivers.

Octaloons: have human faces and torsos, wears seaweed clothing. Their waists have six tentacles that resemble a skirt and their arms are tentacles as well. Their two feet are webbed. They live in the Lakes & Rivers connected to the Aqualakes.

Hammerloons: vary by gender. Males have a hammerhead, human torso and arms with gills and a shark-like tail with dorsal fins. Females resemble a shark with dorsal fins and has a household hammer on top of their heads. Unlike the males, they do not have any arms. Both gender have human-like torsos. They live in the mountains of the Aqualakes called Hammer Mount.

Needleloons: are birdlike fish with long needle noses. They live in the Aqualakes and connecting Lakes and Rivers.

Snaps: have human torsos but a red crab body with hand claws and a jellyfish head. They are very small in book one but grow enormous when back in their original habitat. Snaps live in the Aqualakes and connecting Lakes & Rivers. They bicker with each other a lot.

Gups: are colorful fish with large eyes. They live in the Aqualakes and in the connecting Lakes & Rivers.

Seashorses: are seahorses (giants) that live in the Aqualakes and connecting Lakes & Rivers.

When Mary destroyed their home, the Muddlers (originally Sparvae of the Sparklers) were created–mutated due to their unhealthy living conditions. The Muddler’s Lair was once the beautiful Aqualakes. Now, there is nothing but mud and dead trees.

Species: Muddlers are long snake-like creatures with thousands of sharp teeth that fill the inside of their mouths and bodies. 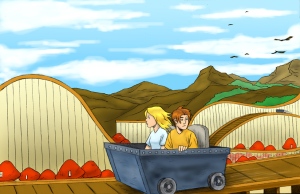 The Silver Palace is where Queen Maryanne and Princess Teri live. The castle is made of silver and is exquisite.

This is a pathway created by the imagination of Mary when she was a child. The path leads to the Silver Palace! Can you guess which story Mary got this path from?

In the center of a forest, there’s a circular stage that the Worker Loonies and Mr. Owl dance on. More about this area in book four, Transition.

In an old barn, surrounded by fields and trees, horses and war horses live and await the day when they can be humans again.

In the Funhouse Zone, you must take a roller coaster ride to each mushroom home. The streets are spongy too. Jerry and Jon Landers live here and keep an interesting secret tunnel.

Once the land was filled with Gigantic Flowers, that is, until Mary destroyed all but a small patch of them. The remaining ‘Colored Ones’ live there.

Species: In the various realms, the only living animals are called ‘Ones’. There’s Colored Ones, Black Ones and other creatures that fall in this category.

In Candy Loo Land, the ‘Ones‘ are colorful–beautiful and varied. They live in what remains of the Gigantic Flowers. There’s several kinds such as Loonettes, Loons, Loonders, and Loonypillars.

Candy Lane  is an area made up of all sorts of sugary treats. The roads are made of chocolate and graham crackers, the fences of peppermint canes and the tree of gum drops.

Species: Baker Loonies live in the realm of Candy Loo Land and reside on Candy Lane along with Missy the Cat. They are bakers and live inside homes made of candy. They have rosy cheeks, blonde hair and in replace of a hand–a cooking utensil.

Loonyville is made up of egg-shaped homes, crazy loonies, trees made of construction paper with pencil trunks and anything and everything you can think up that’s loony!

Species: Crazy Loonies live in the realm of Candy Loo Land and reside throughout the largest part of the realm; Loonyville. The mist does not affect them, they are crazy and live like birds. The Crazies vary from robotic to creatures with umbrellas instead of tails.Many live in shacks (bird nests for beds) high up on top of a gigantic tree, others in egg-shaped homes on the ground.

The Crazies’ tree is where Louie lives. Crazy Loonies live in shacks at the top of this tree and sleep in bird nests. There’s a pink waterfall that brings you down into Merworld and steps made up of roots spiral to the top of the tree.

Species: Crazy Loonies live in the realm of Candy Loo Land and reside throughout the largest part of the realm; Loonyville. The mist does not affect them, they are crazy and live like birds. The Crazies vary from robotic to creatures with umbrellas instead of tails.Many live in shacks (bird nests for beds) high up on top of a gigantic tree, others in egg-shaped homes on the ground.

Merworld is only mentioned in book one. Here’s the only merloonies in the story so far:

King Aaron is a Mer and lives in Merworld trapped in his Coral Castle by Mary. He is only mentioned in book one by the Advisor Loonies and Royal Guard.

King Aaron’s tail is white and speckled with purple. He wears a cloak of seaweed with a coral crown in his purple hair. His eyes are red and he never smiles now that his wife has died.

Advisor Merloonies are Mers who reside in Merworld. They advise the King in the Coral Castle and are his closest friends.

The two main Advisors are Ren and Quan.

The Royal Guards protect the inhabitants of Merworld. They live in a volcano that explodes heart shaped lava bits called Amore Mount. They are Mers that resemble monster-like fish with beta fish fins. There are 3 main Royal Guards: Nerio, Neria and Wiley.

Behind the Silver castle, up above the flooded flowers are tons of caves so high the only way to get to them is to fly or enter them from the air caves. This is were the last three sparklers live.

Sparklers are giant butterflies that have exploding wings (fireworks shoot from them) Their young are called sparvae. The live in the sparkler’s Caves behind the Silver Palace in Candy Loo Land. 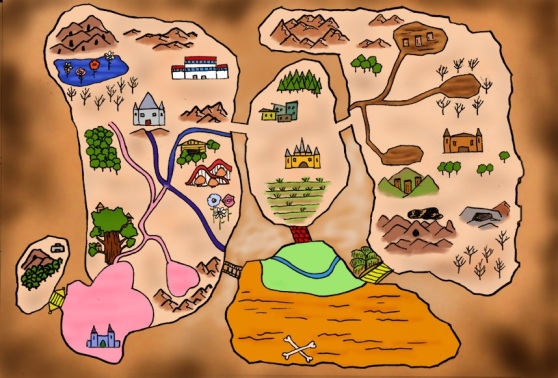